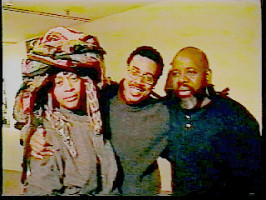 Michael Richards was probably working in his studio on the 92nd floor of the World Trade Centre north tower on the morning of 11 September. According to a colleague Richards's last two sculptures were bronze versions of himself pierced by airplanes and accompanied by meteors and flames.

For the last 10 years he had worked repeatedly with imagery of flight, including feathers, wings and plane parts. The work for which the 38-year-old artist will surely be best remembered was entitled Tar Baby vs St Sebastian, a bronze sculpture made in 1999 consisting of his own life-size body pierced by model planes rather than arrows.

This bizarre congruity between Richards's art and the direct manner of his death might seem typical of that odd semi-psychic ability known to artists. Christine Y. Kim, Assistant Curator at the Studio Museum in Harlem, acknowledged, "We had scheduled that I would see his new work [that week]. His creations often dealt with technology such as aviation, ironically." But it should also be noted that Richards would have applied for this "studio-in-the-sky" specifically because of his interest in flight and aviation.

He was extremely happy with this new, raw studio space granted to him as one of the 15 artists in the "World Views" programme run by the Lower Manhattan Cultural Council. The LMCC was started 30 years ago and ran the World Trade Center Studio Program to take advantage of the small pockets of empty space always available in these mammoth buildings.

The Lower Manhattan Cultural Council offices at 5 World Trade Centre were destroyed but Liz Thompson, its Executive Director, found time to honour Richards, the only artist to have died in the events: "We think he worked late into the night. He was so promising. He was on a tear."

Richards would often spend the night in his studio rather than embark on the lengthy commute back to his home in Queens. "He would work through most of the night and into the morning," said Kira Harris, a close friend. According to a studio neighbour Richards had cooked dinner, watched the Monday-night football and at midnight was still working on his sculpture. Thus "See you later" are his last known words.

Though born in New York Richards grew up in Kingston, Jamaica, and this remained a strong influence, whether in his love of reggae music and ragamuffin dancing or his elegant all-black outfits, Caribbean cuisine and penchant for the "Rude Boy" pose. But Richards had also gained first-hand experience of the deadly gunplay and street violence of Kingston, a situation which as an astute political analyst he saw as largely due to American intervention.

At his packed memorial service at the Studio Museum in Harlem on 125th Street many of the hundreds of mourners spoke of Richards's anti-Republican sentiments and how much he would have hated any exploitation of his death for the sake of American warmongering. Many more mourners spoke of his kindness, gentleness, great generosity and genuine gift for friendship, his "cheesy" smile, shimmying shoulders, soft voice, quiet grace and inner calm. His cheerfulness and soothing ability to settle disputes were repeatedly recounted, along with the fact he never seemed angry. Performances at the service of blues, Gospel and a reggae compilation mixed by DJ Language testified to his great second love after art, that of music.

Richards had gone against the expectations of his Jamaican family in becoming an artist, an extremely rare profession in a society dominated by bourgeois conventions of financial success. After receiving his BA from Queens College in 1985 and his MA from NYU in 1991, Richards completed the prestigious Whitney Museum Independent Study Program in 1993. The next year he became part of the Artists-in-the-Marketplace Program at the Bronx Museum of the Arts.

All this time he was cheerfully supporting himself as an art handler at the New Museum, a studio assistant and general art-world gofer, eating and drinking at openings and relishing la vie bohème.

He had started working around the theme of the Tuskegee Airmen, a crack team of Second World War air-force pilots, black Americans who were racially segregated second-class citizens when back on US soil even if they were heroes in the skies. The Tuskegee airmen were awarded more than 150 Distinguished Flying Crosses but at the same time their Alma Mater was being used for illegal experiments on black men to test the transference of syphilis.

Using material as diverse as tar, feathers, rubber and human hair, Richards dealt with aspects of the Tuskegee history in works with titles such as Escape Plan 76 (Brer Plane in the Brier Patch) and The Great Black Airmen. His work deployed a variety of themes and media, whether a ladder made of feathers or a chariot with broken wheel, but air transport and bonded bronze were slowly becoming his trademarks.

Richards regularly cast his own body in plaster resin and then in bronze and as a regular gym buff was keen on sculpting his own body, which then became the literal "body" of his work. He had been working out at the gym that Monday evening before heading home to his studio in the north tower.

He was well aware of the potential metaphors within aviation, describing the black pilots of the Second World War as

only being free, really free, when they were in the air. They serve as symbols of failed transcendence and loss of faith, escaping the pull of gravity, but always forced back to the ground. Lost navigators always seeking home.

Richards had become Artist-in-Residence at the Studio Museum in 1995-96. A similar appointment at the Socrates Sculpture Park followed and then a third artist residency in Miami. He had also begun to be included in various important group exhibitions including "Passages: contemporary art in transition" at the Studio Museum, "Postcards from Black America", which originated in the Netherlands before travelling internationally, and "No Doubt" at the Aldrich Museum. He had recently shown at the Corcoran Museum in Washington DC, the Miami Art Museum, the Chicago Cultural Center and the Ambrosino Gallery in Miami.

As Richards explained in relation to his exhibition at the Bronx Museum of the Arts:

The idea of flight relates to my use of pilots and planes, but it also references the black church, the idea of being lifted up, enraptured, or taken up to a safe place – to a better world.